The Wire: A Beginner’s Guide to EL Wire Cosplay & Props

If you’re looking for a great and easy way to make your costumes and props glow on the go, this is probably the droid you’re looking for. Recently I started on my first light-up costume, and thought I’d put together a beginner’s guide of what I’ve read and learned so far for anyone else who’s thinking of starting out on a similar project.

Note: While EL wire is one of the safest lighting options available to us as artists, safety is always a concern when electricity’s involved. Exercise discretion and err on the side of caution, read the instructions that come with your purchases, and if you want to do the thing DON’T DO THE THING.

What is EL Wire?

EL wire is an electroluminescent wire made of semiconducting materials that glows when an AC signal is applied to it. It was first invented in 1936 by Georges Destriau, and since then it’s evolved dramatically into a prop-lighting super-resource of sorts. It’s “cold” (more on that below), it can be cut to size, it’s waterproof, it’s very flexible, and keeps its shape (you can curl it around your finger), which makes it very versatile for cosplay and prop-making, especially with moving parts. It’s not as bright as LEDs, but also uses a lot less power, granting it a greater battery life. Plus it’s pretty affordable.

Rather than heating an element to achieve an optimal phenomenon, EL wire’s glow comes from sending an electrical current through itself; the flow of electrons creates photons, which result in the visible glow. This lack of heat generation means EL wire is cool enough to touch and wear even when lit for hours.

Its structure centres on a stiff, solid copper core, which acts as a conductor for the flow of electrons. The entire core is coated in a phosphor lubricant, which is the key to EL wire’s illumination. Phosphorescent and fluorescent materials light up without heat (the phenomenon of luminescence), which is why they are used in CRTs, glow toys, and plasma screens. This phosphor-coated core is then coiled around by its corona – two very thin copper wires entertwined into one long strand – creating a layered unit. To protect this unit from damage it is coated in two PVC sheaths. The first layer is a thin, and lightweight clear sleeve that acts as a protective barrier. The second PVC layer is usually tinted to grant it a specific colour, but also provides an additional layer of protection and – if variegated – can give the illusion of texture. You can read more about how EL wire works here.

In general there’s three thicknesses: thin (angel hair), which is very flexible and well-suited to delicate items like tiaras, but also the most fragile; normal (2.3 mm diameter), which is suitable for most applications; and thick (3.2mm – 5mm diameter), sometimes called “phat”, which is more durable due to its thicker outer layer, but less flexible than the thinner wires and doesn’t really work for fine details or sharp bends.

The wire itself only comes in aqua blue (which appears white in a clear sheath when switched off) and white (which appears pink when off, due to the red phosphor in its core). The tint of the outer sheath is what filters these to produce other colours, such as pinks, reds, oranges, yellows, greens, blues, and purples. The tints will eventually fade from sun exposure over time, so it’s best to keep them stored inside and in the dark if possible. It’s worth remembering that since EL tape, EL wire and EL panels are actually made with different processes their colours and brightness will not be consistent between them and they may not match. Aqua is usually the brightest, due to its purity.

Light-up Bra -Egotism- Be a part of the Rave Nation! www.rave-nation.com

You can do all sorts of things to plan your design, such as sketching with tailor’s chalk, washable markers, pins, et al. I found it helpful to trace along these with a piece of string to work out how much could be done with a single length of continuous wire, and where I would need multiple pieces. Sometimes you’ll need to run a section of wire inside/under the material you’re using. Keep joints and high movement areas in mind. It’s safest to add ~5-10cm/2-3inches of extra length at the end of each piece in case you need it.

You can’t just hook EL wire up to a battery, as EL wire relies on a high voltage and high frequency AC (alternating current) power for an effective and continuous glow. AC ensures a constant supply of electrical current moving back and forth between the positive and negative poles of the circuit, continuously ionising the phosphor atoms. DC is directional, meaning the flow would begin and end quickly as the current passed. AC can also provide higher voltages than DC, improving brightness, which can be controlled with transformers. The energy required is similar to your power outlets at home, but with a much lower current, and in certain applications you can use standard electrical outlets. However, for costuming, battery power is usually the way to go, and that requires an inverter (EL driver). Inverters are not simply battery holders, but also converts the DC power produced by the batteries into the AC you need. With this in mind, higher frequency/voltage results in a brighter wire, but running the wire brighter will reduce its longevity, and it will reach its half-brightness sooner.

Your power needs are determined by how much wire you’re using, and the length rating of the EL driver should match the total length of EL wire that you want to illuminate from that unit, regardless of whether it is wired in series or in parallel. An inverter that’s too small for the length of wire connected to it will be more ‘loaded’ and have a significantly reduced ability to produce bright light. Note also that although the AC power coming from EL wire inverters isn’t enough to severely injure or kill you, it is enough give you a jolt, so please be careful, and use a fuse to prevent short circuits. Never run your inverter/(s) without a decent length of wire attached, as it requires the capacitance ‘load’ of EL wire is required to stabilise.
Some inverters produce a steady glow, while others have in-built sequencers for blinking, tempos, sound reactivity, and various other quirks. Sequencers are programmable and can be used to control lighting patterns.

It’s best to use fresh batteries for optimum results. You can use rechargables, but youre wire won’t be as bright because the input voltage will be lower.

EL is much more flexible and durable than filament lights like neon and fluorescents, but like all solid wires, the copper core will eventually break from fatigue damage after repeated bending. Any part of the wire that’s bent or folded will retain some of that bend even when straightened out, and the wire is more likely to break at those points over time. It’s preferable to place your EL on areas that aren’t flexed as often to ensure your wire has a longer life.

For most EL wires any length longer than 2.5metres will result in a dimming effect, so 2m is the advisable length to use. If you ‘split’ and connect more than one piece of EL to an inverter, count the total length of all the pieces towards your total load. Remember to reseal the ends you cut (hot glue or epoxy work well) so you don’t end up getting a good shock.

I used these tutorials here, here, and here.

Connecting to your inverter

Often you’ll just plug the wire’s male JST connector into one of the female JST connectors on the inverter, making sure they’re correctly connected before putting your batteries in the battery pack to test it.

For props and armour it can be embedded in silicone, or adhered with E6000, 3M super strength adhesive, even hot glue. For sewing projects you can often hand-sew your wire to your fabric with clear monofilament thread, even fishing line. You’ll need entry/exit points for your wire to travel through, and if you’re hiding your inverter inside your clothing you’ll probably need a pouch, pocket, or similar storage space for it ( velcro is a great to close it so the battery pack doesn’t move around too much). EL wire can also be channeled like boning under a piping of mesh or other materials for the desired effect.

Rope lights generate heat, are often more expensive, and are not easily cut down or resized as desired.

… tuning of the donor box. We’ve seen a companion cube sub before that featured EL wire for a ‘glowing cube’ effect, but [Cube] may have taken things a …

Got a Question? Want me to cover a certain topic? Let me know.

Until next time, SEW SAY WE ALL! 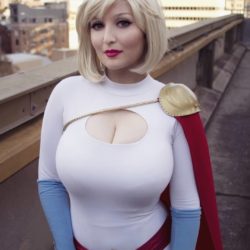 Power Girl by Variable by Cosplayclass 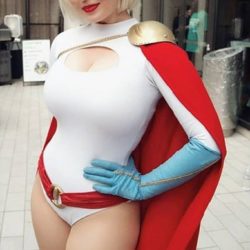 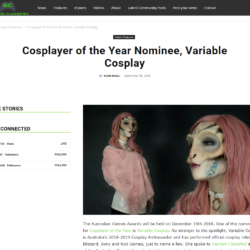 Cosplayer of the Year Nominee, Variable by Yoshi Itoku